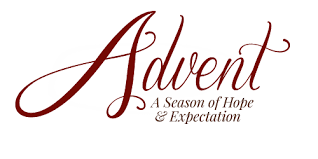 Ever wonder about “Christi Aduentu” (Advent of Christ) and its significance for Christians? The Latin term adventus is a translation from the Greek form parousia, which refers to the Second Coming of Christ. In the Western Christian tradition, observations of Advent encompass three primary forms: 1) to celebrate the birth and Nativity of Jesus at Christmas; 2) to celebrate Christ in one’s heart in daily devotion and prayer; and 3) to acknowledge Christ’s coming in glory at the end of the age.  Advent ceremonies in churches encourage a season of corporate worship and shared expectations, sometimes acknowledging a corporate desire for readiness at the Second Coming of Christ.

The Advent season typically includes a wreath of candles, one of which is lit to celebrate the opening of the season, in conjunction with the reading of Scripture, devotional time, and prayers. Another candle is lit on each subsequent Sunday. Some wreaths include a fifth candle representing Jesus, which is lit on Christmas Eve or Christmas Day.

In the Book of Revelation, sometimes referred to as “apocalyptic, prophetic,” or “epistolary literature,” the Apostle John composed a broad range of prophetic visions written in figurative language, which begins by addressing the Seven Churches of Asia, and the book reaches a crescendo (of sorts) in the Second Coming of Christ.

Revelation is a mysterious book, and especially the enigmatic passage in which Jesus appears on a white horse. This passage mentions several names of the Savior, and it is enveloped in figurative (sometimes cryptic) language. It appears to represent the Second Coming of Jesus:

Now I saw heaven opened, and behold, a white horse. And He who sat on him was called Faithful and True, and in righteousness He judges and makes war. His eyes were like a flame of fire, and on His head were many crowns. He had a name written that no one knew except Himself. He was clothed with a robe dipped in blood, and His name is called The Word of God. And the armies in heaven, clothed in fine linen, white and clean, followed Him on white horses. Now out of His mouth goes a sharp sword, that with it He should strike the nations. And He Himself will rule them with a rod of iron. He Himself treads the winepress of the fierceness and wrath of Almighty God. And He has on His robe and on His thigh a name written:

I’ll attempt to unpack this passage with my own verse in “The Evening News,” which is very good news. 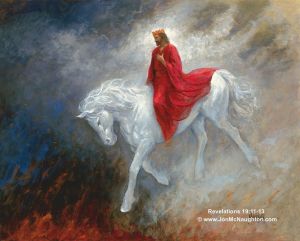 “For as the lightning flashes and lights up the sky from one side to the other, so will the Son of Man be in his day” (Luke 17:24).

Thank you for following! I hope you return soon. Cancel reply

This site uses Akismet to reduce spam. Learn how your comment data is processed.