Finally, a third poem surrounding the life and death of Robin Hood and His Merry Men, one composed by Ellen Miller. I am blessed by some brilliant students in my Medieval Literature class at Coram Deo Academics—a homeschooling adjunct located in Owosso, Michigan.

Move over, Phillip Levine! Watch out world! For I have three brilliant academics in my class who will blow the lid off the world of prosody and poesy. I’m happy to be the first to present the works of these fantastic students. 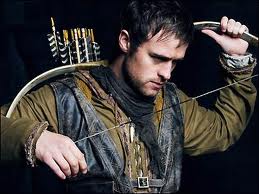 The Tale of Robin Hood

Deep in the heart

Many tales have been woven

Of a great man and his band

Of merry followers and friends.

Not all started out as friends:

In fact, barely any at all,

We are now best of friends,

But that was certainly not always so.

We met on a bridge─

He wanted to pass first,

But I had been there first

(Though he would say opposite).

So we had a quarrel,

I had to admit, he wasn’t bad,

But in the end, I knocked him off

With my broad quarterstaff.

After that (believe it or not),

We became best of friends.

This jest was the name he christened me:

As I tower above them all.

The two of us had,

With other merry men,

We made a name for ourselves,

And many good times and memories were made.

Alas—it was not to last,

For Robin Hood, I must say,

Was not loved by all;

This cousin, a nun,

Brought him down by her “healing” hands.

Did I say, “We are now best of friends?”

Make that we were,

I was with him in his final moments,

And I shall never forget.

He raised his bow;

How he had the strength, I’ll never know,

And he shot one last arrow.

He told me to bury him

Where that last arrow fell.

And so our merry adventures

Came to an end.

But the memories and friendship will last,

And the tale will be told for centuries,

Of one man and his merry band.

Thank you for following! I hope you return soon. Cancel reply

This site uses Akismet to reduce spam. Learn how your comment data is processed.